We knew the Steampunk Museum was the kind of place our younger grandson Karol would be fascinated by. There were all sorts of strange things crafted out of old machinery and metal. I know it added to the atmosphere, but the lighting was very low. That makes the photos a bit dark - my apologies for that! I have adjusted the brightness where possible. 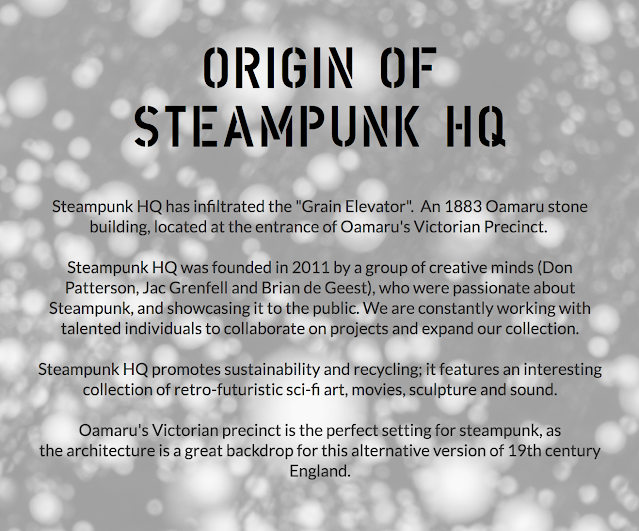 Read about it here

I've not added many captions, mainly just the photos this time. 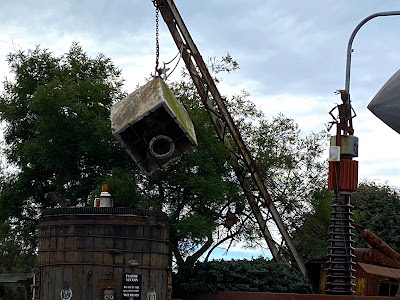 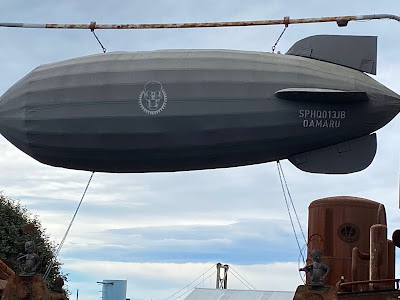 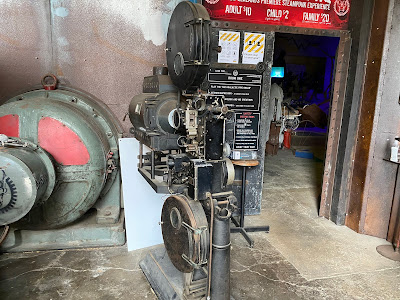 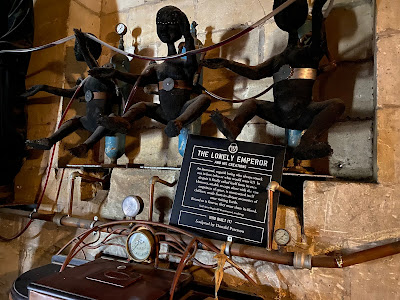 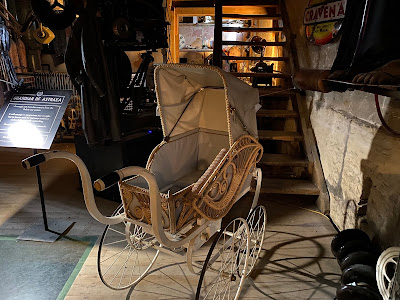 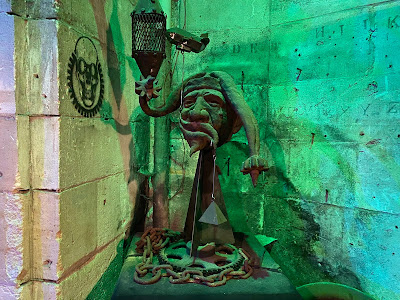 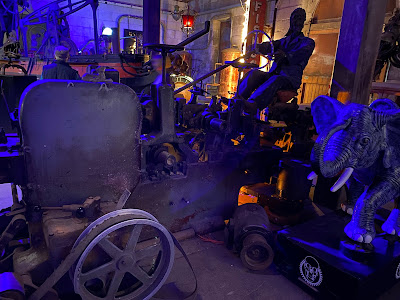 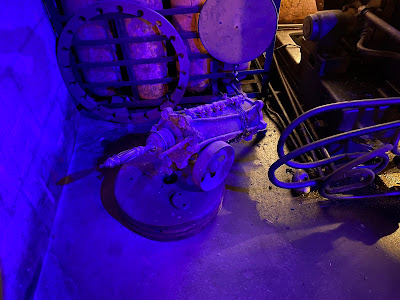 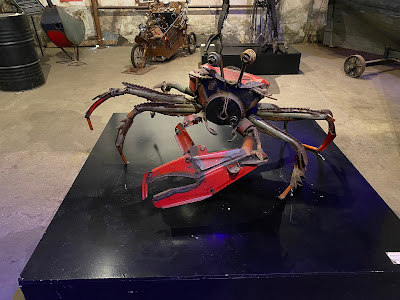 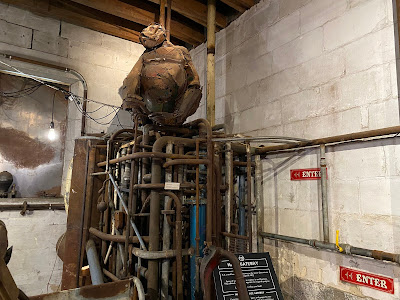 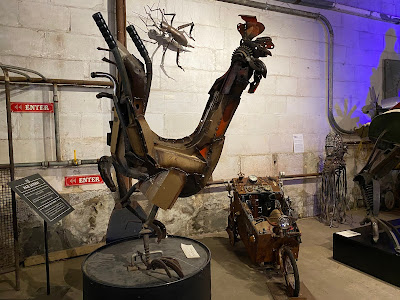 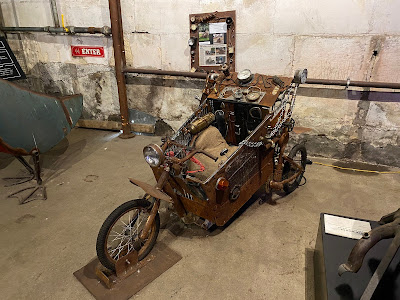 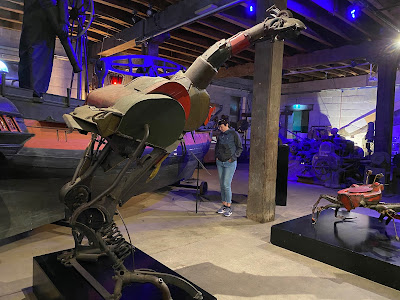 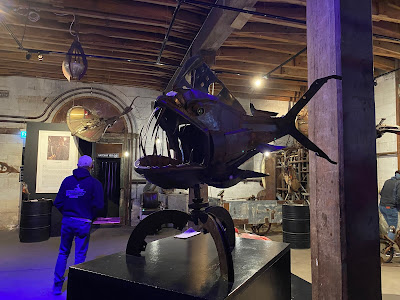 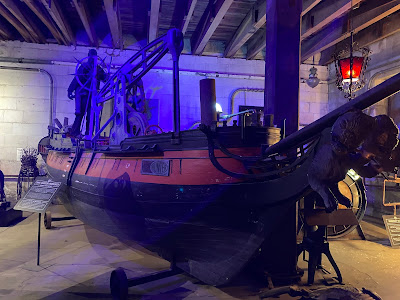 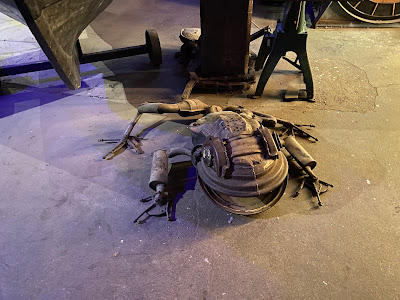 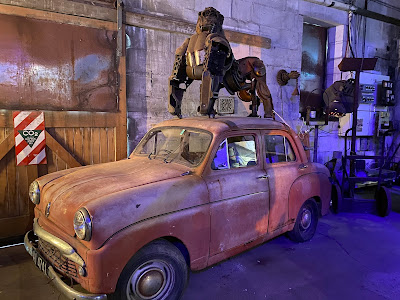 There is a room with a glass floor that I felt weak in the knees walking into - you close the door behind you and the light show starts. Rather beautiful, but I am most uncomfortable with glass floors ... 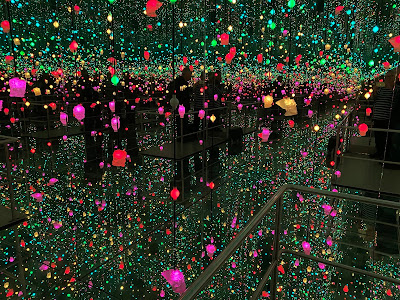 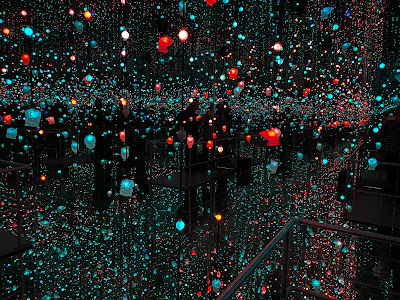 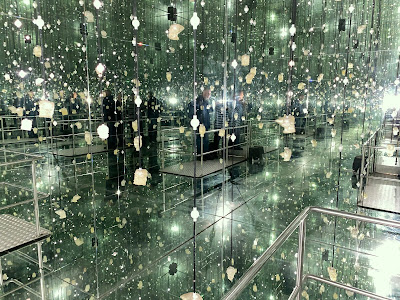 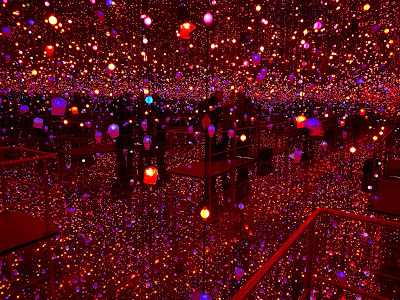 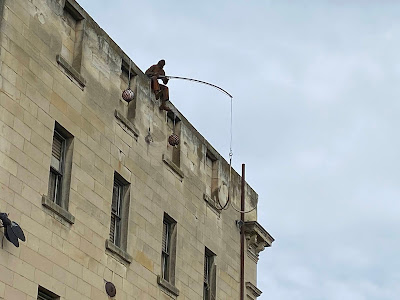 It is pretty cool. To be fair, if I hadn't wanted to send Karol some information about Oamaru, we would not have gone. And I am glad we did.

Christchurch to Temuka and Oamaru

From Christchurch we headed south - we had intended to go back over to the West Coast, but the weather there was due to be absolute pants for the next week. And when it rains on the West Coast it can hose down like all the water in the world has to come down NOW!

So instead we headed down the east coast, and went to Temuka for a couple of days. There is a lovely campsite there that is around the outside of what seems like at least 2 rugby fields - huge! And it was very hot both days; fortunately we had a shady spot under two big trees, one on each side of us. We didn't do much while we were there apart from blobbing (me), making coleslaw (also me), juicing (David). However we did go for part of a riverside walk that started in the botanical gardens next to the campsite. We shortened the planned walk because once we were out of the gardens, we had to walk along the street for several blocks, and it was unsheltered and just too hot for this delicate wee flower ... We did find our way to the supermarket (a small amount of shopping only) and back to the camp via the Temuka pottery store - no shopping, just looking.


There is a cafe in the Temuka Pottery Shop, so on our way out of town the next morning, we stopped for a very lovely breakfast. Once again the staff were very happy to accommodate David's needs for a yummy but totally vegan breakfast.

When we were in Temuka it was early in Auckland's new community outbreak of COVID-19 (remember that this was early in March ...) and they were in Alert Level 3, with the rest of NZ (inc us) in AL2. So scanning in at the door was important, as was maintaining social distancing. Quite interesting to overhear a couple of people complaining - I am always tempted to ask if they would prefer to be in the UK, Europe or the US and deal with intense rates of infection, and in the UK at least, continued lockdown ...

A lovely breakfast and then it was off to Oamaru. The drive down the easy coast was peaceful and pleasant - long straights, a lot of long bridges over braided riverbeds that were rather dry given the long fine spells of summer weather to that point.

We took a while to find the Top 10 motorcamp in Oamaru as I managed to miss a turning and we had to go round the block - a very large one that took us into the main shopping/business area with one way system, then down near the harbour, and on to the lower slopes of some of the lovely homes in Oamaru - with no opportunity to do a U-turn! But it was a good mistake as it helped us get oriented!

We had decided that we would do more sightseeing and touristy stuff if we hired a car and could scoot about without having to disconnect the motorhome from power, remove stabilisers, make sure everything was securely stored, turn off the gas ... So we had organised a car and the guy came to collect me to sort the rental out. More getting oriented as I found my way back to the campsite and realised how I had managed to miss the turning - always good to reflect on the errors, don't you think?

So that we took advantage of the car to do the sightseeing we had agreed on, we went south that very afternoon - to see the Moeraki Boulders and to go to Shag Point even though it was now raining quite steadily. I objected to paying to cross the cafe's deck and go down their steps to approach the boulders, so we went back to the DOC area and walked along the beach from there. That was a good call as the interp at the DOC area was very good. And we also found a Charges Apply camping area (Red Barn by the Sea) beside it, in an asphalted farm yard. Looking at the comments about it on the NZMCA app, it seems to be very good and very popular.

The weather cleared as we walked back along the beach to the car and by the time we got to Shag Point a few kilometres south, the cloud had lifted. There is a bach/beach settlement along the bay before the walk to the viewing area. Once again, the quality of the work that DOC does is evident. Their budget is not huge but they get a lot done with what they are allocated - and all of it is for the benefit of the land, the flora and fauna as well as the people, both NZers and tourists. Can you tell I really appreciate DOC? 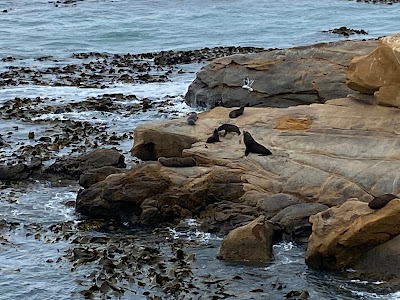 Even though we had called in to a supermarket on our way back, we decided that dinner out was the go instead of going back to the motorhome to prepare something, especially as we had done a fair bit of travelling that day. So we retraced our route into town from that morning because I had seen a Thai restaurant on the main road in from the north and it had good reviews. I was very impressed with their cautious approach to Alert Level 2 for COVID. The waiter asked if we had scanned in, and every second table had a Reserved sign on it so there was plenty of space between groups of diners.

I couldn't decide on just one dish so I had satay sticks (yes, I know - chicken which has a face ...), curry puffs and a small serving of friend rice. Shortly after our meals were served, a woman at a nearby table  said she would like what I was having. The waiter burst out laughing saying it wasn't a real dish but agreed that if it was popular, he may need to add it to the menu ...

We were not quite finished with Oamaru - we had an assignment to complete that we had given ourselves - our grandson Karol had recently done a virtual tour of Oamaru, so the following day we decided to do a bit of a walking tour so we could send him photos. Contain yourselves and wait to see them in the next post ...