On Saturday, David's mum Mary died at home, with David and Ginny holding her hands. They had been with her for almost five weeks, since she had been diagnosed with pancytopenia - her bone marrow had stopped functioning, so she wasn't producing white or red blood cells or platelets. For the first 4 weeks she was fine but got slower and tireder. She still tottered around using her walker, and laughed and joked with them. It is only in the last week or so that she was bedridden and slipped in and out of consciousness. A few days in a row David would ring and say they thought today would be the day, but she hung on - her incredibly strong little heart just kept on beating.

But on Friday the Kahukura nurses who provide in-home palliative care in the Wairarapa told David and Ginny that the end was nearing. And on Saturday at 12.45pm she died peacefully and calmly with her two favourite people there, one each side, loving her and gentling her as she left.

She has been a lovely mother in law - I have always reacted strongly against mother in law jokes as they are such a crappy stereotype. And for me they could not have been more wrong or cruel.

Mary is being cremated tomorrow with no fuss (she is of the generation that did not like a fuss), and on Sunday next week we are having an At Home for friends. I am facilitating the event and will do most of the catering - Mary loved my cheese tart (as do Ginny and David), and she loved sponge cake, lamingtons and custard squares. Even though she won't be there eating them, we will have some of her favourite foods - I do draw the line however at grated cheese and celery salt on crackers ...

My lovely sister Dee has been here with me since Thursday (she had to look after herself for a few hours till I got back home from being an earner) and she is still here - together we have been looking after David, the newly orphaned.  We have been very kind and loving, with the occasional pis*-take - our thinking is that he needs to know that life continues, that we will treat him lovingly as we always do ...

This morning some dear friends came for breakfast, which if I do say so myself, was spectacular. (Dee and I are a damn fine team in the kitchen - we've had lots of practice over the years.) But the main purpose was for them all to be with David and give him their support. Two bottles of bubbly appeared with the guys for toasts to the newly orphaned (and his entree into the Orphans club) and to his lovely Mum.
Posted by Marilyn, nb Waka Huia at 00:06 10 comments:

Today David is 67. He is now sitting up in bed working out how to make his new video camera work. That will keep him occupied for a couple of hours, so I guess there is no chance of him doing the vacuuming before guests turn up for his birthday lunch. Damn, should have made the present ceremony conditional on the vacuuming being completed - poor project management, I say!

No worries, guests are coming to see him, to eat food and drink wine, so a slightly messy carpet isn't a problem.

Update: Quote "My first job is to learn how to get the power on." And guess what? He is reading the manual!! That IS definitely a sign he is aging, even if it wasn't his birthday today!

I have to get up and get things underway. As well as roast beef and the accompaniments, I have to re-do the apple and sage jelly that I did last weekend - it didn't gel because I put in too much sugar, so I cooked up some granny smiths yesterday and left them hanging in a muslin bag overnight. That juice will be added to the un-jarred non-jelly, boiled up (and I am going to add pectin just to be sure as well as some lemon juice to cut the sweetness), skimmed and then bottled again.

Just added two to the guest list for lunch, so more potatoes to be peeled!

A few weeks ago when David came down to join me in Hokitika for the weekend, one of the places we went was Hokitika Gorge - it is a must see when you come down to the West Coast. The drive out to it is wonderful and the gorge itself is pretty amazing.


The water is turquoise because finely ground rock is present. We are able to observe the blue light produced by the water’s absorption, because light is scattered by suspended matter and so returns to the surface. Such scattering can also shift the spectrum of the emerging photons toward the green, a color often seen in water laden with suspended particles.

There you go - educational or what? 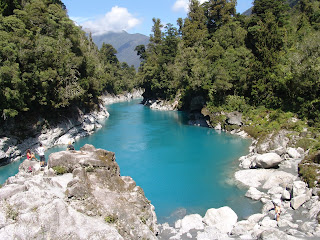 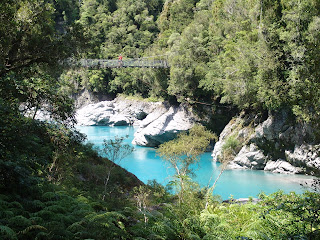 On getting back to the old hire car, I discovered the battery was flat - I had left the lights on. The car is so old that it doesn't beep to let you know the lights are still on when the key is switched off and the door is opened. (And I am the one who complains about the appliances talking to me at home - the washing machine tells me it is going to fill with water to rinse, and then tells me when the cycle is finished, the stove tells me when it's up to temperature, the induction hob tells me when I have put something on its controls, the fridge tells me when I have had a door open too long ...)  OK, back on topic - I always drive with the lights on on the highways, esp in the South Island which has heaps of tourists most of whom come from weird places where people drive on the right hand side of the road instead of the correct side of the road, ie the left.

Anyway, it was a damn and blast moment, given how far away we were from any town and the lack of cellphone coverage in the area to phone for assistance from the trusty Automobile Association.

But to our rescue came the guy in the photo below. We had seen him down at the river - he'd jumped in off the bridge as we were making our way down and was bemoaning the fact that he'd forgotten he had his go-pro camera on him when he jumped. He lost it as he landed in the water. We were unsympathetic and and scoffed privately about his idiocy ...

However when I went around the carpark looking for someone with jumper leads - he was the one who had some. He is from Sweden and was touring NZ in an old car that he had bought and very sensibly stocked with things he might need to keep it going. So who was the idiot - me, not him!

Last Tuesday I flew to Christchurch for a meeting. It was the most beautiful flight - the weather was lovely, there was no wind and the views of the South Island as we headed south were just amazing. I hadn't realised just how mountainous much of the South Island is - no wonder it has fewer than a million people living in it!


NZ is beautiful, but don't get it into your heads to all come here and live - there's not enough room!
Posted by Marilyn, nb Waka Huia at 01:38 1 comment:

Last year while on the Grand Union near Cassiobury, we met Pat and Roger from nb Cat's Whiskers. We saw them again (well, I did with Olek and Lesley) at Napton.

Today they came to lunch here at Cafe Rata.

The common denominators in this are these:

Well, to be strictly honest, he was present at Cassiobury but Barry and I had banished him from the deck or the locksides as he was suffering badly with plantar fasciitis and had to stay off his foot as much as possible; and when we met at Napton, David was in Scotland; and today he is up in Masterton.

Like us Pat and Roger do summer in each hemisphere - their daughter lives in Karori in Wellington and they come out here for 5 months or so.

It was lovely to catch up today over a few hours - often the interactions in locks etc are only a few minutes long. Enough to have a quick conversation and make a snap judgement about whether it's an acquaintanceship worthy of being developed into a friendship.

This one was. And lunch was fun.

And we had a lovely but short walk along the beach, a coffee in one of the cafes nearby, and I managed to get lost twice by turning into the same wrong street - doh!

And then home again to chat some more. And in popped John who is heading to the UK for a holiday next week - he is borrowing our UK map book. I'd made an extra dessert for him - much better than just being offered a cuppa, don't you think?

Roger and Pat left with a bag full of perpetual rocket from my vege plot and two cuttings - a pelargonium and a geranium. And I've just realised I forgot to give her a piece of the tree fuschia - dammit! OK, next time ...