We are staying at the Beachside Motel on one of their motorhome sites, and I have a 1.2 mile walk to work each day (or as I have over the last several days - a 1.2 mile bike ride).

The weather in our first week or so here was beautiful and the sun shining on or rising behind the Southern Alps each day is just mesmerising to me.

However, lest you think my waiting to take photos till I got to work was a low risk undertaking, I need to you to know that my so called friend and colleague Mark was arriving in his ute as I was walking out of the work carpark driveway. He did aim for me. And when he stopped he told me with a huge amount of glee and a great laugh that he had been very tempted, but had resisted the urge. Bastard!!!

As I walked back to the office, I loudly asked some DOC people if they knew just how lucky they are to live in such stunning surroundings. It truly is just beautiful.

Before I left for work yesterday morning from the Beachside Motel where we are 'moored up', I took this photo of the sunrise:
Of course today is very overcast and precipitous (not heavy precipitation, just spitting by West Coast standards) so the mountains are hiding and the clouds are low. It is an area of contrasts which just makes the fabulous days so much more fabulous!
Posted by Marilyn, nb Waka Huia at 23:47 1 comment:

At last we were able to head down to the South Island - a few days later than originally scheduled but it didn't really matter.

As it was, even with extra days to get ready, we still didn't manage to get the vacuuming done before we left ... ACP said he would do it, but once again his packing took longer than he expected. You would think he would know by know to pick a duration, double it and then double it again, and then add some more contingency. But no.

But apart from the floor being a bit gritty in places, the house is clean for us to come back to.

I was spooked on Saturday, the day before we left, because on our way into Cafe Lane in Paraparaumu for breakfast, John G asked if we had changed our booking as the seas were meant to be very rough the next day. Bugger!! However, I was tentatively reassured by David and then fully by my brother in law Murray later that day because the northerly predicted does not cause the big swells - it is the southerly that is the bastard! And there were no warnings sent by text either. Phew, big time.

It was a very smooth crossing, made very enjoyable by our paying an extra $35 each to sit in the executive lounge  - the business class venue, or whatever it is called. The $35 included full breakfast, scones and muffins before arrival, endless tea and coffee, comfy chairs and the application of warm blankets if we wanted to snooze - yes, I did! And we had direct access to the back deck for viewing. If it had been warm enough, we could have sat out there too.

We were on a 6.30am sailing so had docked in Picton by just after 9.30am and headed straight over to Stoke, near Nelson, to stay with Salvi and Ann - not a quick trip as it seems as though there are  multiple ranges to go up and down through on the way. You will not be surprised to read that we had to have a snooze in the afternoon as it had been a very early start ... We slept out in the motorhome as our bed was made up already and it was lovely and cosy. In fact it was SO cosy that the night before, when we stayed in Wellington outside the place Dee and Murray are in, that we were stifling at 1.30am and were up sorting out the overheating situation - we had to remove one part of the two-part duvet. Note to self: an Arctic style duvet purchased in the UK for their cold winters is NOT required in NZ!

Lots of fun with Salvi and Ann. We had Chris and Ann, plus Jack and Sarah around for lunch one day - and it was lovely to see them all. The food was pretty good too - Ann P made a yummy quiche, Sarah made a sourdough loaf, and I cannot remember what else we ate - I am fairly sure there were a couple of salads and a dessert but they have faded ...


I promised to take a photo of the cathedral for Kathryn Dodington in Stoke Bruerne - Nelson is her home town but she hasn't lived there for many years.

Salvi and Ann and David and I took a trip to Mapua in the motorhome the next day to have fish and chips for lunch at the famous fish and chip shop - devastation: it was being rebuilt as it looked like there had been a fire in it. Damn and blast. So it was burgers and wedges instead - all very yum, and a giant score for David and me as we managed not to give back Ann's last bottle of tomato sauce!** 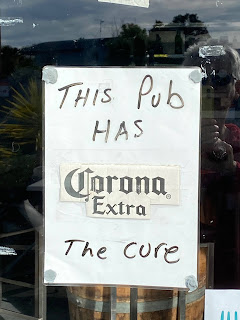 On the Wednesday we made our way to Hokitika and there was plenty of nostalgia, esp as we came through Murchison (stopped for lunch) then Reefton, past the Waiuta turn-off and into Ikamatua. The West Coast still has some very interesting old bridges but they are fast disappearing, dammit!

We only lasted two days at the Shining Star Motel on a motorhome site, as although it is a nice place, we needed sun and gravel given it's winter. There are lots of trees around each site and they reduce the sun and warmth - that would be great in the summer, but now it makes it a bit dingy for David during the day and the grass is interspersed with too much mud at the moment.

I started work in the Hokitika DOC office on the Thursday - it was like coming home.