I have a lot to write and lots of photos about Wanaka, but I have been too flat out to post recently. I have to get that photo of the cockroach off my front page as it looks disgusting! So I am going to post just part of my Wanaka post - incomplete but it will have to be finished off later.

So  here's Part One - severely truncated ...

We really like Wanaka - it is a beautiful part of the country - scenic, a small-ish (but growing quite fast) town, mainly focused on tourism but with our borders closed, it was not as busy as it usually is. Not a tour bus to be seen ... I think the tour operators were doing it a bit hard, but there did seem to be plenty of people eating in and outside the lakefront restaurants and cafes. We sampled some of them over our several days there for various meals: brekkie, lunch and dinner. Some very yummy food and some quite ordinary, but very acceptable.

On the day after we arrived, we had hired a car in Wanaka so that we could explore the surrounding area without moving the motorhome. So not only did we drive around but we did a fair bit of walking too.

We went out for a drive after we picked up the car and I thought I was heading back on the route we had travelled in on the previous day. But no! I had taken a wrong turning and we arrived at this place instead: Lake Hawea - we stopped here to do a very brief exploration, i.e. just of the little parking area, not the township across the bridge over the narrow bit of the lake.

I won't tell you that all the mountains and lakes end up looking the same, because they don't at all. But I am aware for readers, because my photos do not show the grandeur and beauty, that the lakes and mountains can and probably do blend into each other in my posts. Sorry about that! 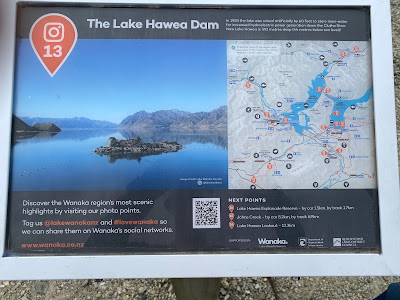 Then it was back to Wanaka and the campsite for blobbing in the sunshine. Catching up with the laundry and several bouts of juicing, if I remember rightly. Sometimes it is important to stop moving and soak up the atmosphere and just enjoy being where we are.