Fame at last - even if vicariously! Even if in Dalry, Scotland ... 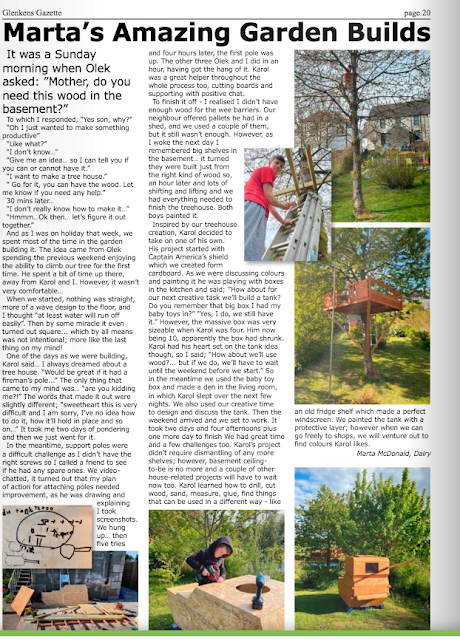 Our grandsons! Ours, I say! And their very clever mum!
Posted by Marilyn, nb Waka Huia at 12:30 6 comments:

A certain person is costing EVEN more money!

Those of you who regularly (at least over the last year or so) read this blog will be aware that last April was the start of fixing a certain person's (ACP's) issues with his eyes - some treatment was free, some we paid for.

Because we were so focused on ACP's eye issues last April in the weeks before we flew out to the UK, he didn't get his usual annual general health check.

That check generally includes a PSA blood test. Do you know what PSA stands for? Nor did we specifically. It is Prostate Specific Antigens. What is an antigen? - it's a toxin. What counts as normal in the PSA reading is anything up to 6.5, but the Ministry of Health's guidance for GPs states that no referral for investigative work should be made until the reading is above 10, unless there are other factors present. Other factors are generally found with a DRE - Digital Rectal Examination.

ACP's PSA reading had been increasing gradually up until 2018 but always the doctor's comment was N for normal. (We are interested to know why any reading for an antigen/toxin counts as normal, but more about that some other time.)

So, this year (with nothing to distract us apart from a global pandemic) ACP had his general medical check in April and asked for a DRE. And good thing he did, as apparently the prostate has grown and there was a nodule that the doctor could feel - nodules are not good! And the PSA test came back as 7.4. So that qualified him for a referral to a urologist for further investigations.

ACP and I had a discussion about the benefits of waiting to have the investigatory appointments done in the public system or paying to have them done significantly faster. While prostate cancer is slow moving, ACP does not like uncertainty and is in fact quite stressed by it. So it was easily agreed that we would go the private route, at least until the results were known and prognosis explained.

So our only outings during Level 4 and 3 lockdown were visits to clinics, one at Bowen Hospital for the MRI, and one to Wakefield Hospital for the biospy. We could do the required exchange of money on the internet ...

The diagnosis was that he has a stage 3 cancer of the prostate, and we agreed that of the two treatment options, the only one we were both comfortable with was surgical removal of the prostate. Neither of us was at all keen on him having 42 days of radiotherapy (apparently known coloquially as Spray and Pray ...), followed by a year of hormone treatment - our reluctance is so hard to fathom, don't you think?

We also agreed that we were neither of us prepared to wait for surgery in the public system - in the main because elective surgery was on hold during Alert Levels 4 and 3 lockdown and the waiting list from pre-lockdown will necessarily be attended to first; and a stage 3 cancer is not as severe as a stage 4 or 5; and he would inevitably (and rightly) be moved down the list for more urgent cases.

So I am no longer retired! Not because we cannot afford this (we can), but because we need to make sure there are some cash reserves for if I get sick in the future. ACP I live with and love dearly has been informed he has used up his quota of our self funding insurance ...

The operation is scheduled for 11 June, and earlier this week he has been for a pre-op blood test and ECG. The day before the operation he has to take the godawful bowel prep to clean him out - so we won't be moving far from home then, will we?!

I am amazed, by the way, how phlegmatic and relaxed he is about the whole thing in the main, now that the uncertainty is over. As soon as he had the diagnosis he grew very calm. As I noted above, uncertainty does not become him.

We have told both our kids, and our families, and most of our friends. ACP has spoken with a few guys who have had prostate cancer with different therapies, and he has listened to an audiobook about saying goodbye to your prostate.

He is on a strict vegetables-only diet as instructed by our friend Lesley to inhibit the growth of cancer cells. It has worked for her so is definitely worth doing - it has been surprisingly easy to give up eating anything with a face!

ACP and I discussed whether I should write this post - we both believe that if it was fine for me to write about his eye issues then it is fine to write about this. And as we have let people know about it, we are finding how very prevalent prostate cancer is. So if this post encourages even just a few men to get into regular screening for PSA plus DRE once a year from the age of 35 (even if you have to pay for it) it is worth it to be more public.

And we had friends around for dinner - just two of them, as the rules state no more than 10 may gather together at the moment, while we wait and see if our low infection rates continue with more and closer contact.

So Simon and Jane came for dinner. There was lots to catch up on and it was hard to resist the automatic urge to have hugs all round - we did resist though, and did elbow bumps instead. Amazing how warm and friendly an elbow bump can seem when hugs are not allowed!

We had beetroot and carrot salad (courtesy of David), a green salad, a kumara and orange salad with bacon and toasted slivered almonds, and a filo quiche thing made with sauteed onion, silverbeet (swiss chard to UK people), smoked fish, salmon, parmesan, eggs and cream with tasty cheese grated on top. It was all extremely yum. 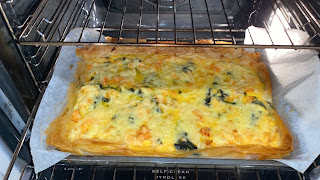 Dessert was poached pears (a Jamie Oliver recipe that I adapted slightly - 3/4 of the sugar stated, probably about 1/4 cup chardonnay added to the syrup, and the syrup quoted for 2 pears/2 people was plenty for 4 with some left over awaiting the next guests on Monday). 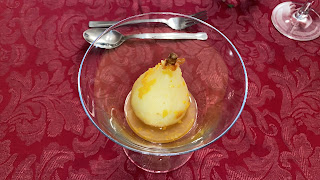 I had declared that filo was too much faffing about, but it tasted so good I will have to keep using it, I think. There is enough left over for David and I to have it for tomorrow's lunch. I may even be able to do another pear each ...


By the way, we are not going to be exercising much of the new-found freedoms that come with Level 2 until we see how the infection levels pan out. We have had several days in the last week where there have been no new cases, and the Director General of Health is fairly confident we have no hidden cases waiting to pop up. But the counsel is to be careful, so as I noted above, we will be - waiting and seeing are the watch-words.
Posted by Marilyn, nb Waka Huia at 03:02 4 comments:

We continue in Alert Level 3 here in NZ. Zero new cases on COVID-19 here yesterday and no new deaths. That is excellent news on both fronts - my fear is though that it will be used in 2 ways:
My fingers are crossed that the latter doesn't happen - it's too late for the former and they are already on their high horse, trying to destroy the government's good work, and spreading misinformation and lies - or to be more charitable: half-truths, or quarter truths.

And we have had people openly criticising the government for ruining the country by providing funds to businesses to pay workers and keep the businesses afloat - and then in the next sentence writing about how they have applied for and taken the money for their businesses even though they say they didn't need it and could have coped without it. Irony, dishonesty, lack of integrity.

I spent the last two days on the verge of vomiting since reading that stuff: I know it was despair and anger that was making me feel nauseous.

I knew that kind of greed and entitlement existed in the US and the UK, but I thought New Zealanders were better than that.

Apparently some are not.

Fortunately they are a small minority. However I do hope when borders open again that they bugger off and live somewhere else - I don't want to have to see them polluting this place.