The trip down to Pershore was on one of the hottest days I have ever encountered - until the next two or three! Sunscreen was a must, regularly applied. I tried to wear a long sleeved shirt but it was too hot! And I couldn't hold the umbrella to shade myself and steer the boat at the same time!

Fladbury Lock and its surrounds were lovely. It was very warm there, but there was a bit of a breeze too - as it does in Wellington, the breeze always helps in the hot weather, even if its help is deceiving and ends with a greater degree of sunburn.


An update on 29 July: While hunting for photos of cheese tart (baked in Nantwich) I found the missing photos of the fish that was caught by Derek from Birmingham; so here they are: 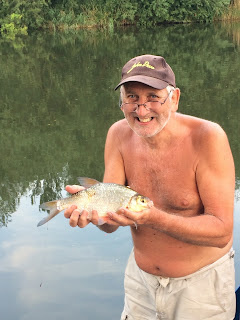 OK, I am getting caught up slowly. We arrived in Pershore a mere 10 days ago ...


If I get up early enough, I will blog again in the morning. But don't hold your breath as we are leaving here at 7.30 to get water and then head through the lock at 8am and cruising back to Tewkesbury for a night on our way to Worcester.

We arrived in Gloucester late yesterday arvo and managed to score good moorings on the full length jetty, as opposed to the short ones that suit the yoghurt pots but are not to easy for the long narrowboats ...

The leaflet said it was 1.5 hours from Tewkesbury (Lower Lode Lock) to Glastonbury. Not so for narrowboats - David and I realised last night that by far the majority of boats on the river are GRPs or yoghurt pots, so the timings apply to them, not to us. It took us over 3 hours, because we were following 2 very slow narrowboats. Even so I am sure we couldn't have done it in 1.5 hours.

Today we have Keith and Ann who used to live on nb Oakfield coming to us for lunch! Yippee! It will be lovely to see them. So I had better get this photo post done so I can start cooking! (Change of plan - cooking is done, so I can relax: ciabatta is in the grill area over the oven doubling in size, the pork stroganoff is almost done, ready for finishing off. I haven't yet made salad, but that is the work of just a few moments, given my rooftop allotment ...)

OK, so photos: Most of these were taken some days ago (over a week, to my shame and tardiness) when were moored at George Billington Lock before we got to Evesham, for heaven's sake! Lots has happened since then, so there will be more photo news later!

The chronology of these photos is fairly wonky, I am afraid and I apologise.

The starters were in Bidford on Avon in the first photo and the misleading chicken and asparagus risotto in the last one was in Stratford. See, this is what happens when I don't keep up with the blogging! Be warned and advised, procrastination is never a good idea!

Evesham - too warm to move, mate!

As I start to type this it is 5.37am and I am looking out over the weir at Evesham, and listening to the canada geese getting ready for their day of swimming, duckdiving for weed, preening and generally looking pretty cool in the heat.

We've had two nights here near the lock (above) and while the moorings are not attractive, they have had the bonus of a wall and trees to create shade we have sat in for most of the last two afternoons.

Evesham is a very lovely town where we have done a small amount of exploring. If it had been slightly cooler we would have done more, but there is always next time!

The weather over the last few days has been stunning - if anyone tells me again that England doesn't do summers, I will have to remind them about this - Lisa on WAL, your David is right: summer starts late in June!

On Thursday and Friday nights we were moored across the river from Offenham at a lovely spot with heaps of mooring and ideal for a barbecue. So of course we obliged, being careful not to make a mess and cleaning up after ourselves. The area we designated for the BBQ was on private land and the elderly lady who owns it turned up on her petrol-powered mobility golfcart (bigger than a mobility scooter) to let us know the fishermen would be arriving from midnight as the season opened. Didn't hear any of them at all overnight though.

Mick and Julia had to head away early on Friday to get to Evesham, to get to Stratford to hire a car to drive home to Desborough to pick up the waterpump that had been delivered and was all of a sudden required due to total pump failure on board Unkown No 3. The rest of us blobbed that day...

It felt very strange not being able to get across to Offenham but there is no bridge across the river between Bidford and Evesham. Well, we could have forded it up to my neck, I suppose (John's knees probably) but it was easier to walk 1.25 miles (they are still working in imperial measurements here in the UK ...) on Friday to Haverton for a yummy dinner at the Coach and Horses - good pub food at a good pub which has won several awards for its beer and its atmosphere.

Dinner out was a well-deserved treat this time, instead of an indulgence, as John and I had worked hard most of the day. John had offered to lend us his angle grinder but when he heard it was to be me wielding it he offered to show me how and then decided he would do the angle grinding, and I was to follow along brushing and wiping and daubing the exposed metal with rust preventer. Back in October 2015 Barry and I had scraped and sanded the runnels, but without the benefit of an angle grinder there were some bits we hadn't seen the extent of. Thursday was an eye opener about how easily rust can take hold and how well it grows below the paint - bastard rust! It clearly never sleeps.

It was a pretty warm day when were doing this work so my shower was delightfully cool - we hadn't run the engine at all as the sun was filling the batteries through the solars. And actually, once the metal sides and roof warm up on the boat, proximity to it seems to double the heat output! I have to wear jeans or I burn my legs on the dark blue sides.

On Saturday I got up early to wash down the roof to get paint and metal dust off it, so I could prime/undercoat it. In the time it took me to make and eat brekkie, the roof had dried out so I could get a coat of paint on. That drying speed indicated it was going to be a scorcher! As it happened, I had just enough time before 8.30am to get the paint on before the roof was too hot for painting.

A cold shower this time, and gosh, it was lovely!

Then away we went heading for Evesham. Both David and John wanted to go to the marina shop in Evesham, so David travelled with John. They went on ahead and John travelled at such a SLOW pace I could have swum faster, I am sure! However I am sure the multitude of fishermen sitting on the whitebaiting stands appreciated that the water wasn't churned up. I did have to ask those already scantily clad if they had their sunscreen on ...

On arrival in Evesham, before John turned into the marina entrance, I phoned Mick and Julia to see if they were back and where to moor - instructions were that I was to hoot the mack truck horn to alert them I was close so they would come and get my ropes. Successful hooting and mooring alongside accomplished and then along came John and David - they had wended their careful way into the marina, all the way along between boats to the shop, only to find it was closed - on a Saturday!!!

Ah well, that is their loss as John was on for buying a life jacket and a couple of deck chairs. And it's our gain as we swapped a life jacket (brand new, worn for 5 minutes by me and discarded as I kept getting the straps caught on the tiller handle - not such a safety device ...) for a brand new cassette toilet. We have abandoned bucket and chuck it for the pee, as we cannot find a bucket that doesn't absorb urine and either end up smelling or rusting. There, that's a thing you know now, as Jaq's daughter Shiery says ...

We are about to join the Lautrec range of boats - you know the kind: they have two loos ... (thanks to Black Prince for that one, by the way)

OK, it is nearing time for the off - we are heading to Pershore and want to be there before it gets too warm. Trust me, I am NOT moaning about this weather - it is glorious. And it is best used in a relaxed/prone/seated in shade fashion!

Pictures will be posted in Pershore!

It's beautiful down here on the Avon - we have now reached George Billington Lock and have had a very successful barbecue for a late lunch/early dinner. The 'island' we are on is private land and the lady who owns it is happy for boaters to use it as long as it is treated with respect - she came down on her mobility/golf cart to chat and tell us so.

The trip down from Stratford has been great apart from exiting the basin where David had great difficulty keeping the bottom gates closed to start filling the lock. Fortunately Julia arrived to give a hand. My part in the drama was to have got close to the lock gates to give David a hand and then being unable to get into position to enter the lock - I had to go back a fairly long way and get John to pull me around so I wouldn't damage any other boats. I called out to Mick that I thought I'd reverse to Wilmcote instead of going down the river ...

Fortunately, he started to strip off his top - I asked him to do a full Monty to take the early tourists' attention away from my shenanigans.

I just want you all to know that I am tired of being a novice again and I want to regain my competence; so there!


I am delighted to see whitebaiting stands on the river! Well, that's what they look like, but I understand they are for fishermen, and the season starts at midnight tonight.
We had two nights at Bidford-on-Avon where David and I managed to go to the same restaurant 3 times; yes, you read that correctly: three (3) times. The first evening we went to The Bridge for starters and mains (fabulous), and decided we need to come back the next lunchtime for dessert. That was fully our intention, but the tomato, pesto and mozerella panini sounded lovely, so we had that. Then of course we were too full for dessert. So back we came in the evening, for cheese cake and chocolate fudge cake. Shared both and they were both delicious.

The village is very attractive with lovely houses and has the archetypal style of English villages in that some shops are slotted in between houses. And the Budgens supermarket at the end of the village is superb!
Posted by Marilyn, nb Waka Huia at 14:16 3 comments: