I have been warned by David that that phrase will be used frequently from now on! Why? you ask. Because on Friday night when Sandra and Barry were staying here, I had bravely (and foolishly) asserted that I never knock over a wine glass. Less than half an hour later I did just that. A bit of a pain, because I lost about half a flute of fizzy wine, and I managed to splatter the board and some of the cards in B&S's game of Sequence. Of far less importance was drowning David's little ramekin of hummus with Lindauer.

So I said, as I raced around getting a tea-towel, the paper towels and the dishcloth, "I very rarely if ever do that." Howls of laughter from the other three.

And after a short interval, I knocked my glass again. You will be pleased to know I did not spill any fizzy that time because I caught the glass. However there was a loud repetitive chorus from the cheap seats of "I rarely ever do that"... Bastards 😂😂😂

After they left on Saturday, I went down to Paraparaumu and bought the Sequence game. We haven't yet played it but perhaps later today.

Last week we bought a small piece of scaffolding so that David can confidently wash the roof of the motorhome. Surprisingly there were no mutual tantrums as we constructed it - usually we have a different view of how things should be put together. Actually, it is more that we disagree on how to move things into place. Given I am so short, I am always looking for the way that doesn't mean I have to over-extend. Taller people can be SO unthinking, I find ...

You can see how short I really am in one of the photos below. I can stand up under the scaffold platform and not touch the under side of it. 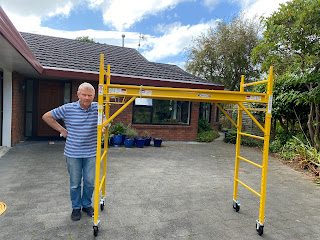 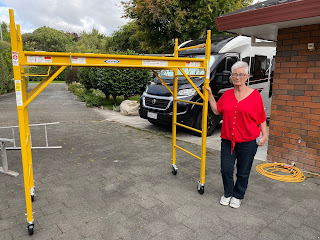 Richard, our recently acquired gardener, has been doing a sterling job removing weeds, removing and pruning back excess growth - this is Waikanae and everything grows madly. Especially as we have had lots of rain and lots of warmth in the last couple of months. I found Richard by stopping and asking two lawnmowing contractors who happened to be chatting by the side of the road a couple of months ago as I walked past. One said he had a guy who did gardening and put Richard in touch with me - a serendipitous matching, as he doesn't have a huge number of clients and can come really often to get things sorted. It's great! Today he has spread 8 x 40litres of compost around the garden after hoeing and sprinkling with calcium to break up the clay. I have been tasked with buying 6 more bags to complete the task ... Maybe it would have been cheaper to get a trailer load delivered, but what the hay!

We have been watching the events in the USA over the last few weeks - watching is a bit of an understatement frankly, because we have been obsessed by it all. The insurrection was scary and only got more so as more video and photos were found and made public. It seems clear that these people all thought that the dumpster would give them pardons, either pre-emptively or after being charged - either that or they really are very stupid to be plastering their faces and messages all over social media. I am following the FBI affadavits that are being shown on the George Washington University website: extremism.gwu.edu

It is such a relief that he is gone. I am not sure how far back in the woodwork his supporters will go or how many of them have changed their views. Not many, I fear, as a significant portion of the 75 million white people in the US who voted for him again obviously feel a huge sense of grievance about people of colour and immigrants having the same rights as them, and people with a social conscience are blamed for encouraging that and disrupting their entitled world view.

We are SO pleased to be living in NZ. I do notice though that, in NZ, we have more than the required number of supporters for the dumpster who also appear to subscribe to all the conspiracy theories going.

And much as we would love to be planning this year's cruising on the English canals, we are happily staying put and having another winter here. We can do without being constantly worried about whether we will get infected with COVID-19 going to the supermarket or being moored where people walk close by the boat.

Perhaps we will do a bit of motorhoming down in the South Island and go to snowy places for a change! In the meantime though we are planning a summer trip down south and then an early autumn trip up to the Far North - when it cools down a bit. I don't like the heat much, and that could be a problem down south as Richard tells us it's regularly 30 degrees in Christchurch at the moment - aaarrrggghhh!!!

And a Happy New Year to all of you!!

Another celebration meant that we travelled during the Statutory Holiday period - something we very rarely do given the heavy traffic, some of it in the dodgy control of speeding or careless drivers ...

So we headed away on New Year's Day and stayed overnight at Awastone in Mangaweka. While the powered site we were on was not much chop, the rest of the site was pretty amazing. When we go back we will stay on one of the open spaces and as long as we have prepared plenty of vegetable juice, David won't have to go without that!


The next morning, after we had prepared juice (we were on a powered site, remember) we headed off to Pukawa to help celebrate Adair and John's 50th anniversary. A lovely event that was nearly washed out given torrential rain, but Rick and Char came to the rescue with a very large gazebo.

I drank far too much and suffered overnight - had to sleep (poorly) sitting up and take lots of bicarb to limit the effects of reflux. AAARRRGGGHHH!!! It was deserved though - not only did I drink too much but I was very rowdy ... No champagne breakfast for me the next day, even though I had been a staunch advocate for it the previous evening ...

We decided to head for Taranaki that day, with a call in to see Denny and Cheryl at their son and daughter in law's lakehouse at Omori. Great to see them, and even though wine was offered, it was a cup of tea for me.

We decided that the rain was too heavy (torrential in fact) to have an enjoyable drive over to Taranaki, so we decided to make our way to the NZMCA park in Taupo and then travel on over the northern side of the lake the next day and head south. But, readers, I was TIRED! So we stopped at the new NZMCA park at Turangi - about 10kms from where we had started out that day. We considered going back to Adair and John's but I just needed to sleep, and would have been considered a dreadful wuss if I'd parked there and gone straight to bed. They would have been right, of course, but I already knew my status!

It hosed down really hard for a lot of the night - well, for any of it that I was conscious for, which frankly wasn't much! But it is a very peaceful place to stay - almost no road noise, and it's a very flat site that is asphalted - a former Ministry of Works vehicle park, I understand.

In the morning, in much clearer weather, we headed for Taranaki - back past Pukawa and Omori and a big right turn at Kuratau Junction to head up the left side of the lake. I should have known we were going a long (wrong) way round when I soon saw signs for Kinloch and then Taupo, both of which are at the northern side of the lake, and we kept heading north - doh!! Must have still been operating on an incomplete brain, I reckon.

When we finally, after doing some heading south (which should NOT have been necessary), got to an intersection which pointed right to Te Kuiti in 30kms, and left to Taumaranui in 56kms, I knew I had messed up - by about 2 hours of additional unnecessary driving, dammit!! And there was still about 2.5 hours to go ...

But at last we arrived in Waitara and pulled up on to powered site 3. It was so lovely to see the family again and we do love staying there.

Blobby days followed, interspersed with juicing, reading, making coleslaw and cheese tart - god, I have missed cheese tart. David isn't eating cheese or eggs or milk or pastry, so I don't make it unless we are at Dee's or I am taking it to friends' place as a contribution to a meal. And because David can't have it, I think it's mean to make it, and have him able to smell it but not partake, I resist taking it anywhere. I figure I am torturing him enough by baking sourdough on a regular basis, and cheese tart is a step too far...

Dee and Murray, David and I went out for dinner one evening to Siam Thai Fusion in New Plymouth - what a lovely place. David had two cooked dishes but they contained all the spices he is meant to eat, so exceptions were made just this once for January or maybe for December so he can have another cooked meal before another month is up...

And then came January 6th in the US, already 7 Jan for us. We were glued to the coverage on MSNBC all day - we had started by watching the vote count in the Senate, just to see who objected and what spurious reasoning they would come up with. But then the break in happened, so we had to stay tuned. It helped that it was raining so domestic chores could be undertaken at the same time - I prepped the vegetables for juicing, and while David did the juicing over in the camp kitchen, I prepped and baked 5 seed crackers. Sometimes it is important to have things to occupy another part of your brain, I reckon!

So our journey home yesterday was filled with live coverage of the aftermath too. And while David emptied the motorhome, I took myself off for an extended nana-nap, in between heating and augmenting a vegetable curry and rice from the freezer. He is a good kind man who appreciates that driving can be wearying even though I enjoy it.

And now David is listening while juicing, and has suggested that we watch from 3pm here today: Rachel Maddow and Lawrence O'Donnell. Apparently it is all heating up again, and Trump has now been permanently banned from Twitter. Only about 5 years too late, I reckon.

We are home for a few weeks now I think, but who knows? Perhaps we should head away again just because we can!