On Saturday as we drove (with not a logging truck to be seen on the road - yay!) from Tokomaru Bay (beautiful) to Te Araroa (also beautiful), we stopped in a few places.


At Te Araroa  we stayed at a lovely Park over Property (a POP in NZ Motor Caravan Association parlance) and were ably cared for by Mairi and Brian. It was just up the road from an NZMCA park, but for an additional $9 we had water, toilets and showers - and grass to park on and no highways right beside us.


We had the benefit of a local tabby cat making its way through the door screen, unasked, uninvited, but in the way of tabbies everywhere, just assuming its welcome was assured. And of course it was ...

We had gone for a walk earlier into the village - on the way, we saw the only good kind of possum ...

The houses in these places may be stripped of their paint by the sun and salt, but always, always, the schools and marae are impeccable, lawns are beautifully mown and you can see the pride people take in their communities.

Te Araroa has a Four Square shop (a bit like the Coop or Spar in UK villages) - Four Square is the chain (locally owned and franchised) that stays in small places that the big supermarkets won't touch. Every town we go into, whether on the boat or in the motorhome, we shop locally  - it's our meagre contribution to keeping these shops going. Four Square was here long before the big supermarkets came along and it is great to see them still going strong in these communities.


Te Araroa also has the most amazing pohutukawa tree that is 350 years old and just huge. Its diameter is about 21 metres.  Read about it in the photo below. We talked about the tree with Brian, the POP manager, this morning, and he explained that it is a local treasure. He told us that one day recently some tree trimmers contracted by the local council came along to trim the branches that were overhanging the road. Apparently the contractors didn't even get out of their truck. They were told in no uncertain terms to leave it alone. 'But it overhangs the road' the council contractors said. 'So move the road' was the response from the locals. The compromise position is a sign saying 'Large Tree ahead. 4.1m clearance' Sounds about right to me.

A shorts day today - bright warm/hot sunshine and that was at 9.30am! So up in the cupboard I start rummaging, and pull out a pair of shorts. Yikes, screaming and yelling - along the back of the cupboard runs a VERY large cockroach - at least 2 feet long. OK, not 2 feet long, but at least an inch long. Far too big for a benign insect, in my view, if there even is such a thing ...

So out come all of the clothes in my cupboard and I try to catch the offending demonic beast. Coward that it is, it hides in between the cupboard and the end wall. Bastard - that is just above my head when I am in bed - of course it is going to then creep down and crawl all over me while I sleep! In a murderous rage, I get the flyspray out of the pantry and spray the shit out of the wall at the back of my clothes cupboard, hoping the cockroach will at least retreat. Off we go to say goodbye to Brian and Mairi, then back we come to head away. I need a pee before we go so I come in the habitation door, and there, lo and behold, joy of joys, is an upside down lying on its back twitching its legs in the air, in its death throes, larger than life (3 feet long, 1 foot wide ...) cockroach. OK, still not that big, but of a size that I can capture in a paper towel, squeeze the living shit out of, and dispose of OUTSIDE the motorhome, in case it gives birth to countless more in its dying moments.  Someone told me that when you squash a cockroach it exudes thousands of eggs which instantly hatch out into baby cockroaches. I am pretty sure that is not the case, but I am taking no chances - hence the battered squashed corpse was left in Te Araroa.

It's been a longish drive today both close to the coast and inland, mostly winding, with a huge amount of ascending and descending. So that I didn't get tired, we stopped for lunch beside the sea.


Then on to Opotiki where we stayed at a POP again on Sunday - such fabulous views from there and, even though the hosts are away, their tenant Shirley took good care of us. 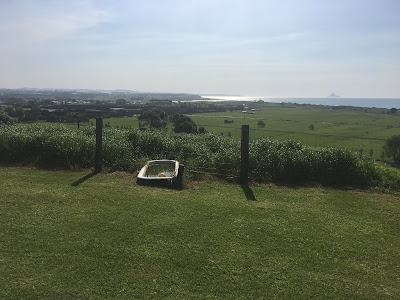 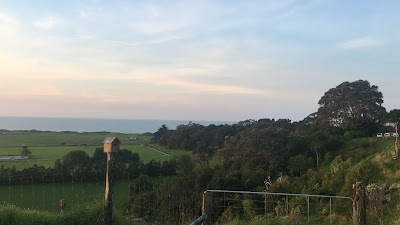 The other two motorhomes that were here for the weekend also have lovely owners. Jim and Marion, Ash and Jacqueline. Four of the six of us were formerly teachers ... Shared drinks and nibbles then dinner separately, and off to an early bed for me - how surprising!

I remember when we lived in Cyprus and George was away somewhere (he didn't spend much time at home while we lived there) and I saw a huge cockroach in the living room. In those days we were supplied by the RAF with a spray to use in just such an event and I sprayed behind the curtain where I'd seen him go and hoed that I'd killed it. I then left the room shutting the door behind me to keep 'it' in and me and the kids out. The following day George came home and I told him where I though it would be and asked him to go find and get rid of it. When he came out he said that I'd not killed it ... I had dawned it in insect spray! I never did get used to seeing them when we lived in Cyprus or Malta.