Our grandson Olek tells me that Burns supper is held in February. And he is undoubtedly correct. However our friends in NZ celebrate the anniversary of his death which was mid-year (21 July according to Wikipedia). And it is a more fitting season to have a Burns Night here anyway as summer is not a season for haggis, mashed potatoes and swedes. Actually to be frank, no season is right for haggis in my view, but what the hey!

Jim and Judy combined three events in to one weekend - a Zero Degrees Club get together, a Burns night and early celebration of Judy's birthday.

So Friday 22nd July David and I drove up to Onaero, north of New Plymouth to stay in a motel close to J&J's place. As we had booked a couple of months earlier (I am a project manager after all, early planning is my stock in trade) we scored the only renovated unit at Seaview Motel - the honeymoon suite, which has a view out over the sea. The others in our Zero Degrees Club had two of the other three units - not so up to date by about 40 or so years, but serviceable and clean and a good size, and as I say, within walking distance of J&J's house, even in the rain.

Of which there was heaps that weekend - it bucketed down off and on each day we were there, and at times it thundered and lightninged, just in case you had thought we were having too gentle a winter here in NZ.

As David is a McDonald whose ancestors hail from Glencoe, and as J&J request a bit of tartan for this event, I organised to hire from Mitchell's Kilt hire (http://www.kilts.co.nz/mitchire.htm) a whole outfit for David - a McDonald clan kilt, the socks, the flashes, the sporran, waistcoat, Bonnie Prince Charlie jacket and the bowtie. He wore his own shoes and shirt, but they could have been hired too. Amazing service, esp as I was tardy in organising it (OK, early planning left a bit to be desired in this, but I only thought of it late - OK Marilyn, when you are in a hole, stop digging!)

I didn't call them till the Wednesday and they were very quick. Couriering the outfit to the wilds of Taranaki was going to be problematic, so Helen and Alan stepped into the breach and picked it up from Cambridge, sort of on their way through from Katikati. Such good friends!

The festivities and formalities of a Burns night had been superbly organised by Jim and Judy, the long tables were set up by Alan and Chris, and the tables were set by Helen, potatoes peeled by Jenny, turnips peeled by David and I know I helped with somethings but I cannot remember what ... Honest, I DID do some helpful stuff (glasses, whiskeys on the table, sautee-ing/sweating the leeks and veges for the cock-a-leekie soup. following Judy's instructions for anything that needed doing).

A week or so beforehand, Jim had phoned and asked me to reply to the Toast to the Lassies (the whole event is filled with poetry readings, toasts, jokes, etc). He had told me that the man who did the Toast to the Lassies would be giving women a bit of a hard time, so I was to feel free. Well, 'bad move, Jim!!' is all I can say. As soon as he was off the phone, it was out with my feminist tome: Picking on Men (a compilation of quotes about men). Armed with a set of pink stickies, I trawled through for the most appropriate ones. I typed them out with their source and then put them in an entertaining order - well, I thought it was ...

I did think they were all fair game - well, I would, wouldn't I being Harsh Bit*h #1? But blimey, guvnor, they'd been making anti-Scottish jokes all evening. So I thought if they were OK with racist jokes then a few sexist ones couldn't go too badly wrong, could they?

I did finish off with showing them my softer side - it was obvious to me that the people assembled for this event (four just over 40 and the rest over 60) that we had been through the mill in our lives - we'd lived, had kids, worked, had health issues etc so there were bound to be things we'd all coped with severally. And what was wonderful was that all of these people were married and clearly loved their spouses. So I said that.

But back to my Reply to the Toast to the Lassies: a taster for you:
See they aren't so bad, surely?

Not sure we'll be invited back next year - good thing we'll be on the boat at the requisite time, but if they do want me to to a repeat performance, perhaps I could do it by Skype from the canals ... I will get my technical consultant on to it! And I will keep an eye on the post ...

OK, it has been a while coming but it is official - New Zealand is now having a winter.

Today when I left home at 8am it was 2 degrees C and clear. On the train trip into Wellington the rain/sleet started and it was cold in Wellington and still wet at the airport. On my way south, it was cloudy and starting to rain in Christchurch, but beautifully sunny and clear in Hokitika - I kid you not, Tom on nb Waiouru. Check out the photos for the evidence.

I am now in the motel unit, heaters are on, electric blanket is turned on warming up to keep me toasty in what is meant to turn into a -2 degrees morning. Good thing I brought and am wearing thermals ... 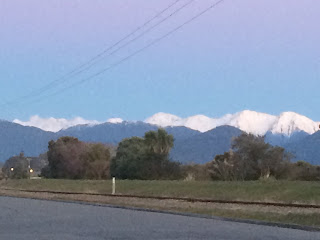 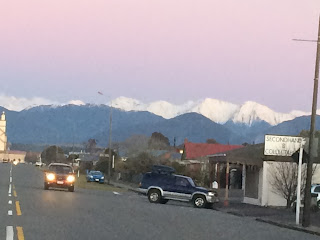 I tell you, the West Coast is pretty amazing, and while it does get a fair rainfall, its good days are stunning and there are lots of them. I love coming down here, and I feel really lucky to be working in Hokitika.
Posted by Marilyn, nb Waka Huia at 00:23 No comments: